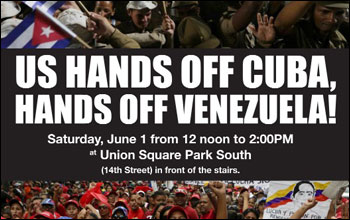 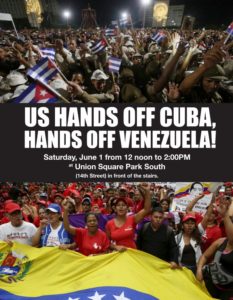 The United States has escalated aggression against the sovereign states of Cuba and Venezuela provoking a crisis in Venezuela and increasingly severe difficulties in Cuba.

Both countries ate suffering increasingly difficult economic situations directly attributable to vicious US sanctions and the theft of Venezuelan assets under the Trump administration. The sanctions are deepening indices of human misery in Venezuela with the explicit aim of replacing the Maduro government with a right-wing military dictatorship under the cover of a US-puppet, Juan Guaidó, who is aligned with the interests of US big business.

The Trump administration views “regime change” in Venezuela as one path to eradicating, once and for all, the Cuban Revolution and the socialist policies of international solidarity which Cuba exemplifies. When the most recent coup attempt in Venezuela failed, Trump et al. blamed Cuba for the debacle and used this as an excuse to end the 25-year-old waiver of Title III (waived by every President of the US since its passage – until now) of the legislation known as Helms-Burton. Not waiving the provision opened the floodgates for lawsuits against Cuba for property nationalized legally after the triumph of the Cuban Revolution in 1959. These claims were settled by Cuba with the entire world in accordance with international law in the 1960”s but the U.S. refused to settle with Cuba. Additionally, the Trump Administration said it would announce new travel restrictions for people-to-people exchanges between the US and Cuba and tighten economic sanctions in existence since 1961. These measures are already causing hardship and scarcity in Cuba.

The blatant subversion against Venezuela fizzled and flopped. The anti-Venezuela coalition of conservative Latin American governments, Canada, and a number of European Union states that Trump, Bolton, and Pompeo initially lined up, is beginning to crack and calls for an end to US sanctions and military threats are increasing.

A List of Legislation Opposing US Sanctions and Intervention Against Cuba and Venezuela and where individual representatives in your district have stood on these issues. Include are the addresses of elected officials where you can register our demands!