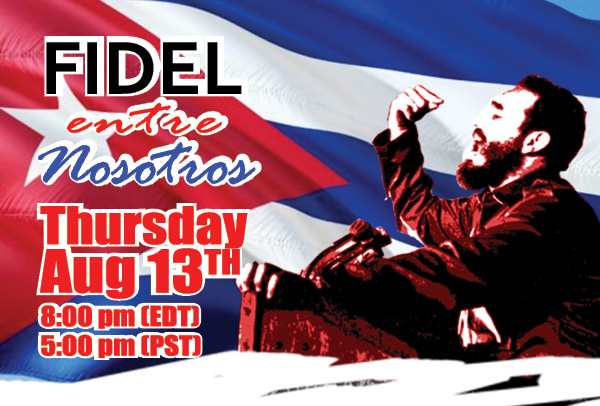 Join us on Thursday, August 13 for an extraordinary International Webinar to celebrate the life and legacy of Fidel Castro on his birth date. Join us for a thoughtful discussion and rousing cultural presentations in tribute to the great revolutionary fighter.

In the nearly four years since his passing on November 26, 2016, the relevance and resonance of Fidel’s revolutionary and socialist ideas, and the practice of the Cuban Revolution he was the central leader of, are greater than ever. They are living examples of how working people and oppressed and exploited humanity can move forward in today’s crisis-ridden capitalist world order, wracked by the COVID-19 pandemic and economic catastrophe.

Fidel Castro is one of the outstanding revolutionary leaders in recorded world history. His life, heroic example, ethics, integrity, and, above all else, his revolutionary and socialist ideas, made a huge impact on 20th Century history and world politics that can never be buried or fabricated with calumny by imperialist propaganda.

Among these towering achievements: the winning of genuine independence and sovereignty — and dignity —for the island nation of Cuba. We look to the policies of the Cuban Revolution which conquered illiteracy; gained equal access for all Cubans to world-class and free health care and public education; and which implemented huge advances in women’s rights and the eradication of racist discrimination.

We especially note the socialist and anti-imperialist internationalism permanently identified with Fidel and the Cuban Revolution. In particular, we will never forget the decisive part of Fidel’s Cuba in the defense of Angolan sovereignty, the winning of Namibian independence, and the unraveling and defeat of apartheid South Africa. Our panelists and solidarity expressions from around the world will highlight this particularly beautiful essence of Fidel’s life and contribution to the liberation of the working class and humanity.

Join us to celebrate brother Fidel Castro’s 94th birthday and pay tribute to his remarkable life!

(This Program will go for 2 hours with Q&A)

Ike Nahem —Longtime anti-imperialist and socialist activist. Retired Amtrak Locomotive Engineer, member Teamsters Union and Railroad Workers United.  He is active in Cuba solidarity work in the New York-New Jersey area and a central organizer of the International Conference for the Normalization of U.S.-Cuba Relations. Author, The Life of Fidel Castro: A Marxist Appreciation.

Tamara Hansen  —lExecutive member of the Canadian Network on Cuba, Coordinator of Vancouver Communities in Solidarity with Cuba (VCSC) & Author of “5 Decades of the Cuban Revolution: The Challenges of an Unwavering Leadership”

José Ramón Cabañas   – Ambassador of the Republic of Cuba to the United States.

Mary-Alice Waters – President of Pathfinder Press, a major US and international publisher of speeches and writings of Fidel Castro and other working-class leaders, from Malcolm X and Farrell Dobbs to Thomas Sankara and Vilma Espín. Waters has edited or written some 30 books on the Cuban Revolution and its communist example.

Clever Banganayi —  Friends of Cuba Society in South Africa (FOCUS); Clever is a Cuban-trained Engineer who studied in Cuba 1991 to 1996 during the “Special Period” of economic crisis and intensified the US economic war. Clever is a recipient of the Friendship Medal Award from the Cuban Council of State for his work in the campaign against the US blockade and for the freedom of Cuban Five.

Vijay Prashad — Indian historian, journalist, commentator, and Marxist intellectual. He is an executive director of Tricontinental: Institute for Social Research and the Chief Editor of LeftWord Books.