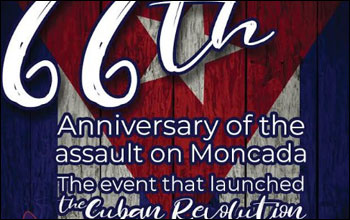 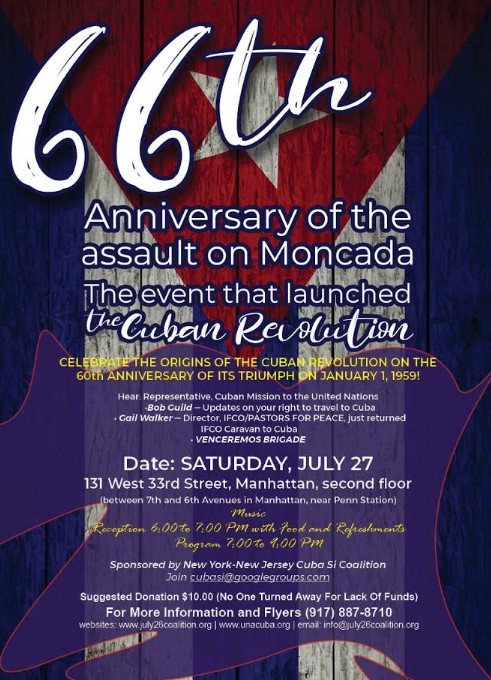 In Manhattan (Near Penn Station)

On July 26, 1953, 160 young revolutionaries under the leadership of Fidel Castro carried out an attack on the Moncada army barracks in Santiago de Cuba. They sought to spark a mass uprising to restore constitutional government after a coup by US-backed dictator Fulgencio Batista. That day, the fighters were defeated, but their action was the opening battle of the Cuban Revolution which triumphed on January 1, 1959. Since that time, US government policy has been to subvert, defeat, and destroy the Cuban Revolution through an economic blockade, sabotage, political hostility, and, over the years, violent and terroristic attacks. A meaningful normalization of US-Cuban relations is only possible with the end of all remaining hostile US policies including economic and travel sanctions; the need to respect for Cuba’s right to self-determination and sovereignty; and the withdrawal of U.S. forces from Cuban territory at Guantanamo Bay. Since December 17, 2014, the struggle for these goals is on a stronger footing than ever. In April 2018 Cuba completed its electoral process with the election of a new National Assembly and the election of Miguel Diaz-Canel as President of the Council of State. The newly elected Council of State was particularly marked by the election of women and Afro-Cubans to top leadership positions.