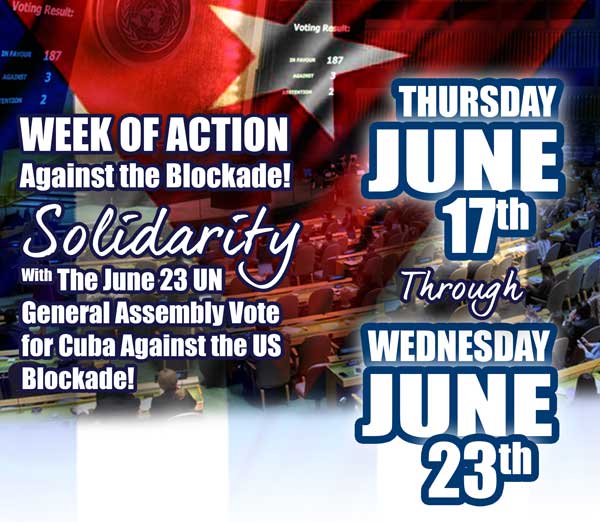 At the United Nations General Assembly (UNGA) meeting on June 23, 2021, Cuba will bring its annual resolution on the necessity to end the United States “Economic, Commercial, and Financial Embargo“ against the island. For 28 consecutive sessions, the UNGA has overwhelmingly voted in favor of ending this criminal and unjust US policy towards Cuba.

There is no doubt that this year, once again, the world will stand with Cuba in this vote. Cuba solidarity and anti-blockade activists and organizations in the United States and Canada are calling for united international action to increase the pressure on President Joseph Biden and the US Congress to end to the over 60-year-old cruel sanctions and bellicose hostility against Cuba!

In this light, the US-Cuba Normalization Committee is inviting people from the US, Canada, and around the world to get involved with a Week of Action Against the Blockade, beginning on June 17, 2021, through June 23, 2021, the day of the UN vote. Below is the initial list of events being organized, including the June 20th Car and Bicycle Caravans to defeat the blockade, and a 24-hour global online picket action that will culminate with a victory celebration of the historic UN vote in an international webinar.

On June 17th, the Cuban Institute of Friendship with the Peoples (ICAP) is organizing an international webinar to lead up to the June 23 vote at the United Nations against the blockade. More information will be available soon!

Once again, the friends of Puerto Rico’s decolonization and independence and all who oppose the criminal US blockade of our sister nation of Cuba will show our united solidarity.

Join the ProLibertad Freedom Campaign, The NY-NJ CubaSi Coalition, The Venceremos Brigade, and IFCO/Pastors for Peace for a solidarity picket/protest for Puerto Rico at the United Nations! Once again, the friends of Puerto Rico’s Decolonization and Independence and those who oppose the criminal blockade of our sister nation of Cuban need to show their solidarity. For the first time in recent history, the United Nations decolonization Committee Hearings on Puerto Rico and the annual vote on the Cuban Blockade are taking place within a week of each other!

On Friday, June 18th, the U.N. Decolonization Committee Hearings on Puerto Rico will be held. It is important that the international community see that the Puerto Rico Diaspora and its allies are united in demanding Puerto Rican Independence and Self-Determination.

A film about the untold story of Cuba’s contribution to help victims of Chernobyl.

Olexandr Savchenko, “Sacha,” was one year old when the explosion of the nuclear power plant Vladimir Ilich Lenin at Chernobyl occurred on April 26, 1986. He lived in Chernigov, a village in the Ukrainian countryside near the area of the accident. He got sick shortly afterward and doctors were unable to make a clear diagnosis because the healthcare system had collapsed while the then Soviet Union was close to disintegrating. Sacha’s condition worsened to the despair of his mother, Lidia Savchenko, who took her baby from one doctor to another without his getting better. One day, other mothers in similar situations told her that there was a possibility that he could be treated on a small island far away. Sacha, it turns out, is one of the 26,000 boys and girls from Russia, Belarus, and the Ukraine who were treated in Cuba over a 21 year period after the nuclear accident at Chernobyl.

This is the context for the history told by the new 39-minute documentary film; Sacha, A Child of Chernobyl, directed by Cuban film-makers Roberto Chile and Maribel Acosta Damas and produced by the Argentine news agency Resumen Latinoamericano.

You do not need to register to view the movie

For nearly one year, a group in the United States, “Puentes de Amor” (Bridges of Love) led by the Cuban-American community, has been promoting monthly “Bike & Car Caravans” against the US blockade on Cuba in cities across the US and Canada. This inspiring movement against the inhuman US blockade has become a collaboration, initiated by Cuban-American activists and organizations and supported by the US and international Cuba solidarity movement. On June 20, the car and bicycle Caravans will be taking place in dozens of cities across the US, Canada, and around the world as part of the lead-up to the June 23 vote in the UN.

We encourage you to get involved in this important Caravan movement – and join in your own city. We are stronger together! Register your activity — starting time, location and public contact person. Email to: June20register@nnoc.info

Listen to a message from Carlos Lazo, Cuban teacher whose bike ride from Seattle to Washington DC inspired these caravans

24-Hour Global Online Picket Against the US Blockade on Cuba!

As part of international mobilizations at this important time – we invite you to unite your voice with people around the world at a 24-hour global picket featuring speakers, cultural performances, live-streaming of UN debate and vote, and more! To conclude the 24-hour picket action, there will also be a victory celebration international webinar featuring speakers, distinguished diplomats, and musicians from Cuba and around the world!

HOW CAN YOU GET INVOLVED?
1) Make sure to register: www.tinyurl.com/24hr4Cuba
2) Send your own 1-3 minute solidarity video messages speaking out against the blockade. These could be in any language. These can be sent over WhatsApp to +1-778-882-5223 or over email to webmaster@canadiannetworkoncuba.ca
(with Wetransfer or other file transfer services).

Organized by: the Canadian Network on Cuba