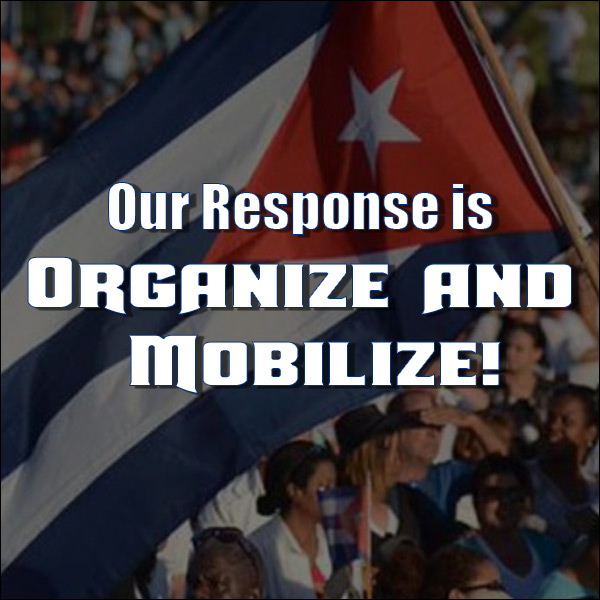 The New York-New Jersey Cuba Si Coalition unites dozens of organizations in opposition to U.S. economic and travel sanctions against the Island of Cuba. We vigorously denounce the latest groundless and vindictive attacks by the Trump Administration directed at the Permanent Mission of Cuba to the United Nations. These include the expulsions of Mission Political Advisor Jorge Pena and First Secretary Rolando Vergara as well as further restrictions of the travel “privileges” of all Mission personnel to the island of Manhattan.These measures came just as Cuban Foreign Minister Bruno Rodriguez arrived in NY for the opening of the United Nations General Assembly and as Cuba prepares to deal another political blow to Washington’s anti-Cuba policies at the annual UNGA vote overwhelmingly condemning the US blockade on November 6-7. Trump and his team are obviously aiming to preempt and divert the political focus away from the isolation of US anti-Cuba policy around the world.

For decades opponents of Washington’s anti-Cuba policies have organized all kinds of public events in solidarity with Cuba — from celebrating Cuba’s decisive part in the unraveling and defeat of apartheid in South Africa to freeing the Cuban Five; but always in opposition to Washington’s immoral and cynical anti-Cuba stance.

For sixty years the US blockade of Cuba has been maintained through ten White House Administrations with Congressional support. In the second term of the Barack Obama White House, the remaining Cuban Five political prisoners were finally released, and Washington-Havana diplomatic relations were restored. Additionally, travel restrictions were importantly loosened.

The current Trump Administration has deepened harsh anti-Cuba measures, especially since the failure and debacle of the US-supervised right-wing military coup in Venezuela last April – a self-inflicted wound Trump’s team aims to scapegoat Cuba for.

So far in 2019 Trump and Pompeo cancelled an agreement between Major League Baseball and Cuba; unilaterally stopped very popular Cruise Ship stops in Cuba; radically reduced people-to-people, cultural, and family travel to and from the Island; promoted frivolous lawsuits in US Courts against Cuba by enforcing Title III of the Helms-Burton legislation; levied millions in dollars of fines against foreign financial institutions for violations of the economic sanctions and even restricted the amount of money families in the US can send to their families on the Island.

US policy makers and their agencies are well aware of the increased and expanded work of the Cuba solidarity movement and defense of the Cuban Revolution inside the United States as part of a worldwide movement to end all US sanctions once and for all. They are compelled to counter majority opinion in US society that favors an immediate end to the hateful and brutal blockade of Cuba and restrictions on travel to the Island so US citizens and legal residents can see its reality for ourselves. We categorically reject overt and covert attempts at regime change that the US has perpetrated against Cuba for 60 years and will work for free and equal friendship and exchange between the peoples of our countries.

END ALL ECONOMIC AND TRAVEL SANCTIONS AGAINST CUBA!
US OUT OF GUANTANAMO!

Nothing can stop our organizing and our legal and peaceful protests!